Welcome to the Boiler Room! This is a place for all things Steampunk. I am newer to the world of Steampunk though I have enjoyed it, unknowingly, for some time. I’ll cover a variety of topics in the genre from music, to games, and TV & movies. In this week’s installment, I’ll be discussing Steampunk music.

My personal music tastes have always varied greatly. I tend to lean toward classical or Irish folk music, though I heartily enjoy other types of music from artists like Jonny Lang, The Doors, Flogging Molly, and Nuttin’ But Stringz – to name but a few. When I mentioned a growing interest in the Steampunk genre to a friend of mine – and thank you ZBott – he turned me on to a favorite band of his and the topic of today’s introductory post…

As with all things Steampunk, even the name of a Steampunk band eludes to their mechanical undertones. While I was initially turned off by the name I YouTube’d them and was hooked. This band isn’t just a band, but as with other Steampunk bands, they also perform as a cast of characters. In their case, robots. Well, to give them their due, they are a “Musical Pantomime Troupe.”

The short version is that they were the invention of a man a long time ago and have just recently come to life. There is a much longer, drawn out story to it – which if this even slightly intrigues you, I recommend you reading it HERE. Now all creative genius-ness aside, this group is amazing. They offer delightful songs that have amazing harmonics and the lyrics are wonderfully written. The first song, Honeybee, remains one of my favorites. I’ve even played this for my infant son and he liked it.

The group has undergone some changes over the last few years with a member or two going off on solo projects but the main performers have been with the band the whole time. Now, cool your piston rods, in case this next part concerns you but I wanted to mention it… there has been a bit of controversy with the band as the leader singer and one of the founders, “Bunny” Bennet, is a transgender performer. You may notice in earlier performances, like in Honeybee, “Bunny” performed as “Rabbit”. Throughout the years, Isabella Bunny Bennett went through the process of gender reassignment – the details undisclosed – and identifies as a female though she was born “Chris” the identical, twin brother to other founding member, David Michael Bennett.

While in other genres this may have ostracized the group, the LGBT community is quite active in the Steampunk subculture already. “Chris” decision has been taken in stride and “Isabella” now performs as Bunny who looks the part of a female. 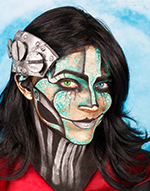 That aside, I find the group both talented and enjoyable and definitely worth checking out. Stay tuned for future machinations from Boiler Room!