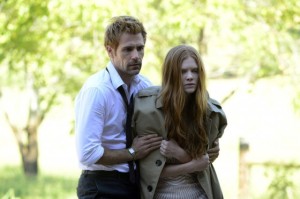 Long time no… read? Is that the way I should say it after a delay in posting? My most sincere apologies to my readers for not getting this review up sooner but actual life took me over for a while. Real life, you know – that dull drum existence that we use delightful things like Constantine as an escape from. And episode seven, “Blessed are the Damned”, was one such delight.

Continuing to push closer and closer to the core of the plot and its Judeo-Christian, theological roots we were introduced to a small town preacher who had lost his way. It seems this shepherd had taken over his father’s flock and he lacked the same zeal his daddy did. This vicar had a vice for vipers, which led to daddy’s death and the son’s as well – but, cue the music “Dum, dum dah!” he is resurrected and lives.

How? The angel that was to escort him to the pearly gates lost one of her feathers and it ended up in his possession and it brought him back to life. This feather, being of angelic origin, had mystical powers to heal the lame and diseased. But, and there’s always a “but” in these stories, it comes at a price – a great one. And since I thoroughly enjoyed this episode, I don’t want to give the rest away.

The story did offer more insight into John’s opinions on faith, which I always find enjoyable. Staying in series form, we only get Zed or Chas in each episode and Zed was the tag-along in time. Her desire to experience the true divine is inspiring. The aspect I found most interesting in this episode though was Manny.

Manny appears and carries on several conversations with not only John but the angel who lost the feather. It seems that any tampering with the wings leads to the angel being unable to reenter the spiritual realm and will ultimately lead to their earthly demise. This adds a plot twist and a reason to rush things – which felt much different than my other issues with this in previous posts. Manny is curious how pain feels and how the sun felt on her as she passed over to the earthly and corporeal plane. His sincere desire to connect was thought provoking.

So, once again, I found myself enjoying this and ready for the next. NBC has stated they aren’t planning on renewing the series past the original thirteen, which I had heard were only supposed to be eight. Ratings have been favorable but probably not what they had hoped for. Maybe episode eight – “The Saint of Last Resorts” – and the cliffhanger I’m sure it will offer will inspire them. I surely hope so.