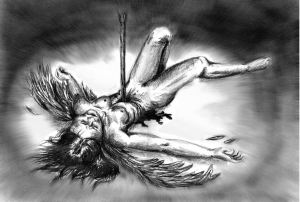 John was never a very patient man. Add a craving for cigarettes that was driving him up a wall and it made for a train wreck waiting to happen. The three had sullied up to the bar, sampled a few specials Perkins seemed acquainted with that John had never heard of before, and before he knew it the he was waking up in a hotel room with an all too familiar figure.

“We have to stop meeting like this,” John said, her outline barely visible against the window light. The sun had just begun to rise and she stood bare in the window. Her wings outstretched, only visible to the select few she showed her true side to. She had to conceal them or they’d get in the way…especially when she and John were together.

She laughed lightly, “And why is that? Ashamed to be seen with me? As if anyone could see us. Or do you not enjoy our little rendezvous,” she said turning to him, grinning. Her smile was always magnetic, but it was her eyes – the way they pierced the darkest soul – that had always drawn John in.

John sat up a bit, pulling the sheet up to keep himself covered. “You know what I mean, things are different now,” he replied.

“Tsk, tsk Johnny. I’ve been on this Earth too long to worry about a supposed weapon capable of killing someone even like me. I’m sure it’s something else that killed them,” she said striding to the bed, strutting the whole way. “Besides…nothing can kill us except those like us…” she said in a high and mighty tone stretching her wings out for display. “And if it is possible,” she said flirting, “some risks are worth it…” she said prowling to him up the bed and kissing him lightly, “wouldn’t you agree?”

She’d gotten him in trouble SO many times with this course of talk. Talk that led to other things. But he quickly forgot about all that as she tore the sheet away and came closer. She knew, as did he, that he’d been too drunk to remember much of last night, something she planned on making up for now. He didn’t know what they had, and had had so many times before, but right now he didn’t care. He just let himself be lost in her eyes as the rest of her lay closer to him.

In a few moments they were both so captivated by the embrace that they barely noticed the crack of the door as it was broken in. Hardly heard the barrage of bullets as they were sprayed about the room. But in an instant, her wings thrust out, instinctively, and shielded John as the bullets tore through her chest. John was aghast as he saw burning holes appear on her ivory-skinned chest. And then it stopped. John incapable of seeing who, blinded by Castael’s wings. Watching her die on top of him. The enchanting eyes that had captivated him so many times fading to darkness right before him.

(Just joining us and want to start at the beginning?  GO HERE.  Missed the last installment?  GO HERE.)