Note: This review covers issues 21 and 22 only.  The story continues in future issues.

Zero Year timeline: Pre-Batman.  Bruce Wayne comes back to Gotham after a 12 year absence (very similar to the beginning of Batman Begins).  Like the movie, Bruce disappeared and was legally declared dead.  Wayne Enterprises is now controlled by his Uncle and his Uncle’s trusted adviser, Edward Nygma.  Bruce returns to a city that’s under siege.  The mysterious Red Hood gang is randomly targeting Gotham’s citizens.  Seeking ways to avenge his parent’s deaths, Wayne sets off on a mission to bring the Red Hood gang to justice. 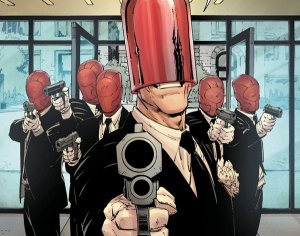 Each issue is broken into two parts.  The first segment takes us through the Zero Year story arc.  The second segment is basically a one-shot.  The one-shots fill in the missing time during Bruce’s 12 year absence.  In issue #21, we discover Bruce fleeing the Rio De Janeiro Police and picking up a few driving tips along the way.

What’s this all leading to?  Snyder promises some surprising revelations about the Red Hood gang and we’ll get to see Bruce Wayne suit up as Batman for the very first time.

So far, the Zero Year story is developing at a snail’s pace.  This version of Bruce Wayne isn’t as angst-ridden as previous renditions.  That’s really throwing me off.  I don’t feel connected to Bruce as a character.  I’m really hoping that changes in later issues.

There’s no denying Scott Snyder’s ability to tell a riveting Batman story.  Snyder and Capullo have done some amazing work with the Batman universe.  I will continue to give this story a chance, hoping it will pay off big in the end.  Not every story needs to reinvent or enhance the Batman mythos in amazing ways.  That shouldn’t be the expectation.  I’m going to keep reading Zero Year and hoping this story takes the Batman universe and flips it on its ear.  Stay tuned.