Two of the most notorious heavy weights and big hitters in the Marvel Universe have crossed fists before. Then again Hulk has faced many heroes when in a state of total rage. In the story I am referencing though there are a few factors that make it different. This was a short film where basically Hulk and Banner are split and Loki (attempts) to control the Hulk’s body. Of course this fails and it results in total Hulk chaos. [Spoiler alert!!!] In the end it takes Banner to sooth the Hulk and return things back to normal.

Even though my theory is a little different the theme still remains. Thor is immortal,

a Norse god and the son of Odin. Needless to say he is a powerful advisory and it would take a great deal to stop him. On the other hand the Hulk is basically immortal and packs some power that rivals even the mightiest of the gods. When Hulk goes into a rage and starts a wave of destruction there is little to stand in his way. The major balance that keeps Hulk as a member of the “good guys” is Bruce Banner. Sure, the Hulk can be dangerous alone while in a complete stage of anger, but if Banner is in there somewhere he can eventually rein him in. The dangerous Hulk is the one where both Banner and the Hulk are on the same side and have a common enemy. This means all the power of the Hulk aided by the focus of Banner.

Going back to Thor, I do not think that it is necessary to discuss how strong he is or the fact that he wields a magical hammer. If you are reading this you already know 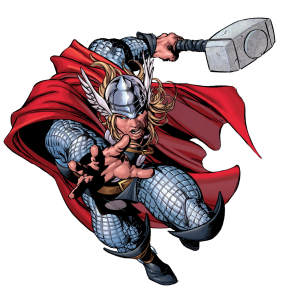 that information. The important part to know for this match is the compassion of Thor. The god is not a killer and that goes double for those that are close to him. Banner or no Banner the Hulk is still a friend to Thor and he would not kill him willingly. Even though Thor is immortal, when faced with a danger like the Hulk he has to worry about damage control and innocent casualties. After all not everyone is invulnerable.

In the end I do not think there can be a winner. If, for example Thor became an enemy to Banner and he was subject to the attacks of both personalities he would still have to make a though decision. Since the Hulk cannot be killed it would have to be Banner, now here is the tricky part, Hulk won’t let that happen. The best Thor could do is kill the Banner persona and is all that would do is leave a rage filled monster of destruction. Considering that would ultimately leave Hulk truly alone for the first time, being that banner is his only consistent companion this would make him pretty pissed. All-in-all I think the Hulk would stop ripping things apart but he would not be the same and Thor, who would still be alive would have deal with the burden of what had happened. Long story short I think this is one match that would be epic, but truly a sad end.

[Editor’s Note]: You may have noticed the lack of banner for this post. Normally I like to create a “vs” banner for each AHB issue but I am in the middle of moving and just didn’t have time. Issue #4 will have the normal format so please check back later.