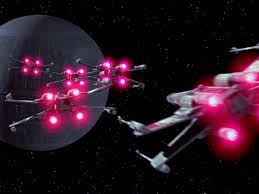 The stakes are high and the winner will rule the galaxy. There is a Kickstarter campaign to fund a fully operational Death Star. The goal is to raise $850,000,000,000,000,000. The Empire needs your help. To date, 2,283 people have pledged monetary donations to get this project off the ground (and into space). The Empire is a fiscally responsible organization. They plan on using open source hardware and software to keep costs down. Backers will receive a very special gift for their contributions. Each backer gets their name etched on a MSE-6 Series Repair Droid used during the construction process. This campaign ends on April 1st. The Empire thanks you for supporting the dark side of the force.

Don’t worry Rebel Alliance sympathizers. In response to the Death Star funding campaign, the Rebel Alliance has launched a Kickstarter to build a squadron of X-Wing Fighters. The X-Wing project has already secured $519,000 of the $11,000,000 needed. The Rebels are offering a number of reward levels including admittance to a light saber building workshop and actual Jedi training by Yoda himself! **Please note, the Rebel Alliance reserves the right to utilize the teaching services of another Jedi master without providing advanced notice to the student. This Kickstarter also ends on April 1st. May the force be with you and your tax-deductible contribution.