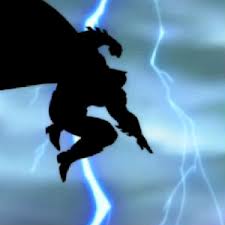 I recently watched a truly amazing movie. An animated feature titled The Dark Knight Returns: Part 1. I know what you’re thinking. “Adrockington, we all know you’re a huge Batman fan. Aren’t you being a little biased?”. Answer: No. Absolutely not. If I was biased, I would have purchased and watched this movie when it came out several months ago. Instead, I got in line and waited for the only copy the library had (I was 13 on the waiting list). So I waited. And waited. Finally, I got the call. The movie was mine (for a week).

A little background for those who don’t know. The movie’s source material is Frank Miller’s Batman: The Dark Knight Returns. Dark Knight was released as a four part mini-series in 1986. These groundbreaking books completely redefined the Batman mythos. Ten years after the last sighting of the Batman, Gotham is under siege. The ultra-violent group of street punks (named the Mutants) is terrorizing the city. Bruce Wayne seems indifferent to this new threat. He’s mentally and emotionally broken. Of course, he’s eventually puts on the cap and cowl. This book is gritty. It’s dark. It’s violent. It’s an amazing portrayal of the Batman we all thought we knew.

Batman fans really cherish Miller’s work. Which makes an animated feature a tricky propostion. How will this adaptation stack up to the source material? I’m not here to nitpick. Are there differences between the two works? Sure, a few minor differences. For the most part, the movie is spot on. Peter Weller (Robocop) is fantastic as the voice of Bruce Wayne/Batman. Truly great work. Carrie Kelly/Robin was brought to life by Modern Family actress Ariel Winter. Bringing a female Robin into the Batman universe was a genius move on Miller’s part. Put me down as a Carrie Kelly fan. The storytelling is rich and satisfying. I was so drawn to the story, I forgot I was watching a piece of animation. Kudos to the movie’s creative team for taking on Miller’s work. Go do yourself a favor. Watch the Dark Knight Returns: Part 1. It gets the Adrockington seal of greatness.

2 thoughts on “Do Yourself a Favor, Watch The Dark Knight Returns: Part 1”