Let me begin by saying welcome to the first edition of ‘Geek Notes’! I have been thinking about doing something like this for some time and I have put it off for the same reason that I am writing this several hours later than I intended. I do not have time. More accurately I do not have enough time to do this the way that I envisioned it. Rather than whine and complain and avoid “sub-par” work I figured I should give it the old college try. The worst thing that could happen is that I tear a hole in the fabric of time and space.

I was there on the night of the announcement; by there I mean I was at home trying to stream it live. I was able to get some of it and I even did some Tweet action. I ended up listening to it a second time since I still missed the majority of it. Know that I have had some time to digest all that I have looked at and heard I would like to translate it into what it all is and how it applies to the “dad on a budget”.

I am not a super gamer anymore so I cannot join the flame fest of people who think this may not meet the high demand and lack of holodeck. I can speak as a person who has small children and a small paycheck. This thing looks great! I think that I am super excited partly because they have answered the demands of the developers and are adding in great bonus features for the consumer. I know that they are supposed to target the consumer but the truth is that  they are making a medium to be used by game makers and the more quality developers they have in their pool the more they systems they will sell. Building this around the needs of developers will allow us to get great games we really want to play and that will drive us to want this system.

As an ex-super gamer this means something very different. I will get my grubby hands on this someday but what I really care about is my chance to catch up on eight years of PS3 gaming. It may surprise some of you to know that I never bought one. I have an Xbox 360, but that was a cheap deal I got. The truth is that PlayStation has not unveiled the actual machine, a set release date or a price tag. They projected Holiday 2013 but no actual date. This tells me that it will be ready for the end of the year when people typically worry less about cost and that the price will be high. That means I will not have the cash to get one plus games. On the other hand they will have a ton of PS3 machines to unload and their price will drop like a ton of bricks. 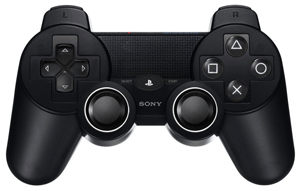 I think adding some of these items and keeping the price realistic will help convince people who are budget minded and on the fence about purchasing a PS4 system to jump in and get one.

Well, that is it for now, I hope you enjoyed my frugal dad take on this awesome system. To sum it up I would say it’s neat, I want one, cannot afford it, will get a PS3 system and games on the super cheap.  Next week I will take on the Kenect and why my wife wants to be a tiger.

2 thoughts on “Geek Notes: PS4 and the Geek Dad on a Budget”